In searching for themes among William Shakespeare’s plays, I observed numerous parallels between the views that the poet chose to assert regarding love and romance in Midsummer Night’s Dream and Twelfth Night.  It’s confusing, really, to try to determine exactly what his position on the love actually was. The story Shakespeare tells in the plays is so inundated with metaphor, sarcasm, humor and irony that it’s near impossible to determine his true feelings on the subject. It seems, however, that Shakespeare generally espoused the beliefs that love truly is blind, and that “the course of true love never did run smooth.” The two plays illustrate both points exhaustively.

What better way to illustrate the ridiculous nature of a thing than a farcical play on the topic? A Midsummer Night’s Dream mocks love, and demonstrates how lovers are scatterbrained and inconstant, flitting from one beloved to the other with hardly a care. It’s interesting that Shakespeare uses fairies as the manipulators in the story, as they are whimsical, imaginary creatures. It’s quite ironic that these little fiends are responsible for the multiple shifts of romantic interests in the play. Even more ridiculous is the premise that each human character’s emotional whims are determined by an extract from a magical flower. The love potion thus becomes a symbol of the unreasoning, fickle, erratic, and undeniably powerful nature of love, which can lead to inexplicable and bizarre behavior and cannot be resisted.

All of the human lovers woo each other without subtlety, full of jealousy and selfish determination, which could be argued is the exact opposite of love. The lovers are ruthless in discarding one another, as if the past and the romance they had never existed and never mattered at all. At one point, it becomes apparent that even before the fairies started manipulating the lovers’ desires, Demetrius had made love to Helena. Lysander tells us:

“Demetrius, I’ll avouch it to his head,

Made love to Nedar’s daughter, Helena,

And won her soul; and she, sweet lady, dotes,

This inconstancy without provocation proves that humans don’t need any help being fickle and flippant about love. This also explains why Helena love Demetrius still, and is so tormented when the fairies cause him to leave Hermia and become infatuated with Helena once more.

The fairies in the play are the truly twisted ones, manipulating the humans for amusement while they torment themselves and each other with emotion. Oberon, the Fairy King, is in a jealous rage, and apparently uninterested in the happiness of his beloved, Titania, the Fairy Queen. He doesn’t really even care much for her until she leaves him. The limerence-stricken Titania is determined to make Oberon jealous and gain his devotion. Her obsession to this end leads her to cavort with a (literal) jackass. The jackass (Nick Bottom) himself, never questions Titania’s affections, and is quite content to just go along for the “ride.” He is clearly driven by simple lust, and is more interested in receiving donkey food than attempting any romantic wooing for Titiana:

“Titania: Or say, sweet love, what thou desirest to eat.

Bottom: Truly, a peck of provender: I could munch your good dry oats. Methinks I have a great desire to a bottle of hay: good hay, sweet hay, hath no fellow. (4.1.1576)”

Puck is the most (and only?) honest character in the play, mocking others as he reveals their true natures to them. He flirts with them and cajoles them, and seems to have a better grasp of the true nature of love than any other character. It is interesting that Puck is also apparently the most jaded of all characters in Midsummer Night’s Dream. Is this because he thinks that love is just an illusion, or does he still believe in true love, but has observed too much folly and bumbling among these lovers to take them seriously any longer?

The play ends with the young people who have chosen each other being allowed to stay together, rather than with the partners that their elders chose for them. This suggests that Shakespeare may have had sentiments in favor of romantic leanings and youth rather than logic and experience.

A Midsummer Night’s Dream is absolutely dark and mischievous. It carries notes of abusive brutality and brazen sexuality underneath the lighter farcical aspects of love-play.  Perhaps Shakespeare believed that this was the true, underlying nature of love. A sentiment expressed by Lysander that succinctly summarizes the proceedings:

“Ay me! For aught that I could ever read,

Could ever hear by tale or history,

In summary, the entire play makes love seem cruel, shallow and painful. Although Shakespeare calls the dynamic between various characters “love,” it really isn’t love at all. Infatuation causes people to be cruel and selfish with someone they covet. Love, on the other hand, causes a person to give of themselves and seek to make their beloved happy, protected and healthy. Shakespeare’s view of love is sick in this regard – which might have been the entire point of this farce of a play to begin with.

Like Midsummer Night’s Dream, Shakespeare’s Twelfth Night is rife with irony, despair, and fickle love. Duke Orsino’s love for Olivia, for example is not love for the woman herself; he’s in love with love. He would rather “love” Olivia from a distance and pine after her than actually commit to her. His wooing of her is even done vicariously through Cesario, his manservant. Orsino has few direct interactions with Olivia himself. His violent metaphors about love include “gorging” upon this love in order to satiate the unbearable longing that it inspires:

“(Orsino) If music be the food of love, play on.

Give me excess of it, that, surfeiting,

Olivia, on the other hand, is infatuated with Cesario, who is actually Viola. This double-role, in itself, seems completely absurd: how could Olivia not notice that Cesario is a woman? This suggests that she is blinded by infatuation, and not really seeing Viola, the real person behind Cesario, at all. Doesn’t love cause a person to seek to know and be known by the beloved? 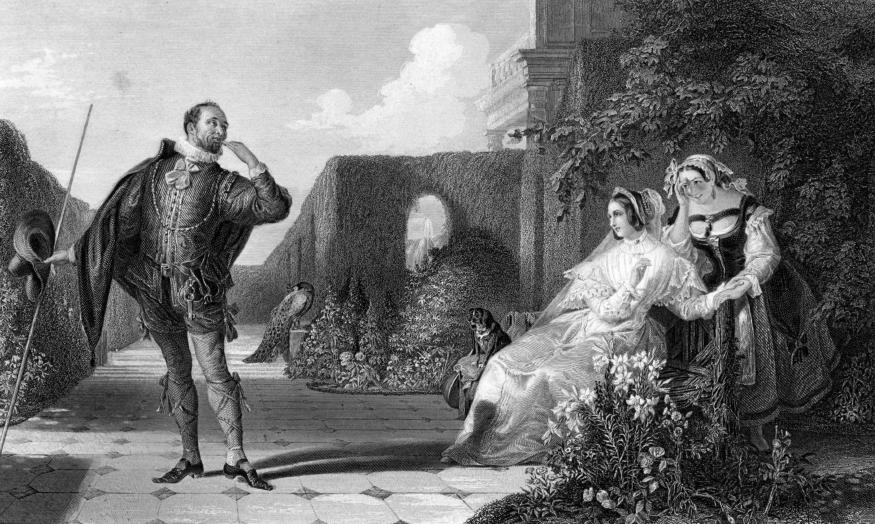 Viola, with her heart of gold, loves Orsino. This may be the only case of actual love in the entire play. She is patient, kind, protective and good to him. She would do anything – even pretending to be his manservant for a while – to be next to him. She relates to him as a friend, stays loyal to him, and listens to his concerns – even when he seems to be falling for another woman (Olivia). She bemoans her painful position between Olivia and Orsino, saying:

“Oh Time, thou must untangle this, not I.

In the end, though, her fidelity and perseverance are rewarded by Orsino, as he professes his sudden change of heart in a most romantic speech:

“Your master quits you; and for your service done him,

So much against the mettle of your sex,

So far beneath your soft and tender breeding,

And since you call’d me master for so long,

Here is my hand—you shall from this time be

A more tragic scenario is created when Olivia’s sad servant Malvolio becomes infatuated with Olivia, and attempts to woo her with ridiculous gestures, such as wearing yellow socks. This unfortunate soul has fallen for a cruel prank that was orchestrated by the other servants. In this taunt, the servants mock the idea of love completely and ruthlessly. Malvolio is ultimately ruined and humiliated by his infatuation, and brought low by his own self-love (arrogance).

Some might say that Sir Toby is in love with drinking, which illustrates an off-color sort of concept of love for an inhuman thing. I have made a similar observation in Twelfth Night about the jester, Feste: he is in love with the truth. Besides being the cleverest character in the story, he is also the only one who never uses falsehood or dissembling to make a point or speak his mind. He is so astute at observing others that they can scarcely keep up with him in conversations. He toys with them, making puns at their expense. While less jaded than Puck (from Midsummer Night’s Dream), Feste is similarly the honest, moral-revealing, comedic character in Twelfth Night. Feste, unlike Puck, seems content to observe, rather than interfere, with the romantic bumbling of the others in their convoluted love triangles. His tentative attempt at warning Malvolio is summarily dismissed by Malvolio:

Feste seems to care not a bit for this or much anything else and waxes (ironically) poetic on the futility of love’s meanderings and other desires:

“When that I was and a little tiny boy,

With hey, ho, the wind and the rain,

A foolish thing was but a toy,

Shakespeare purports, then, that love makes a person foolish, and unable to act as they normally would. In love, a person loses sight of himself. Perhaps the poet wasn’t as jaded as he seems. I could be that Shakespeare intends to inspire others to seek true love by brazenly mocking the various forms of false love, such as infatuation, idealism, vanity and greed.

Summarily, a common thread among both plays regarding love is the eventuality of the illusions of love wearing thin as time goes on. Shakespeare also seems to believe that jealousy and infidelity are unavoidable in love. Ultimately, every character is forced to realize the truth of his or her own emotions, impulses, and situation, for better or for worse. The duplicit nature of love, then, is summarized by Shakespeare in this way: Falsehood in early love is portrayed in a ridiculous and farcical light; the ultimate disillusionment is often portrayed as being quite painful.