The Art Deco Movement of 1925 – 1940 marks a time of exuberant excess, and is characterized by bright and linear ornamentation in visual art, geometric elegance in fashion, and hard-edged decoration in architecture.  Artists, architects and designers of the time sought to embellish all things tangible, from the largest skyscraper facades to the smallest shrimp fork. Borrowing designs from the preceding trans-continental Art Nouveau Movement, traditional oriental design, as well as American Indian geometrics,  Art Deco artists embodied an eclectic style that was pragmatic as well as stunning. “For all its panache, Art Deco was immensely practical in execution (Wentworth),” decorating and  influencing design on even the most common household textiles. The end of World War I in November of 1918 ushered in an era of freedom and expression, punctuated and made possible through the re-emergence of expressed feminine sexuality in society, the invention automobiles, and the up-rise of factories for mass-production.

The Art Deco movement began in France after World War I in response to criticism against the fancifully lush Art Nouveau style. “In the increasingly conservative political climate, critics saw Art Nouveau as ‘decadent’ and over-elaborate. It failed to meet the demand for a modern national style.”In a time of booming industrialization and post-war nationalism, veterans of French Art Nouveau like Maurice Dufrene and Paul Follot recognized the need to modernize tradition (V&A),” finding the new factory style of mass production highly effective in making its everyday objects d’ art widely available and affordable. In contrast to the whimsically flowing, heavily-ornamented style of Art Nouveau, Art Deco found relief from the curvaceous pastel “excessive decadence” of its predecessors in the severity of its new (but still heavily-ornamented) characteristic sharp geometric shapes and bold hues. Another notable influence of the Art Deco style is Cubism, which is actually an avant-garde, eclectic conglomerate of “movements such as Fauvism, Cubism, Futurism, De Stijl, Suprematism and Constructivism (V&A).” Cubism is characterized by fragmented geometric, abstract forms, and is inspired by urban industrialism. This passion for machines is found echoed in Art Deco’s interpretation of the time’s enthusiasm for beautiful women, technological advances and “urban imagery of the machine age (V&A).”

In terms of Art Deco design, one of the most under-celebrated artists of the period is Viktor Schreckengost. It is estimated that nearly “every adult alive in the United States today has handled objects designed by Viktor Schreckengost – from dinnerware and lawn furniture to toys, bicycles, and pedal cars.  (Adams).” He is considered a sculptor, designer, teacher and artist. Many of his designs are still in use today, including those used for Murray bicycles and Sears housewares. He was something of a prodigy, becoming an art professor at the Cleveland Institute of Art at very young age. He influenced, through his teaching, other notable designers of the 19th century, including Giuseppe Delena, chief designer for Ford Motor Company.

This multimedia application of talent seems typical of the Art Deco era artists. This is likely a result of the common goal of these artists to create functional art. While the Art Deco style is highly decorative by design, it is also typically imposed upon objects of everyday use. This is in stark contrast to the primary goal of earlier art movements to make art simply for art’s sake. While earlier artists were content to keep their paintings on easels and their statues on marble platforms, Art Deco artists were determined to decorate even utilitarian objects in the world around them.

A more widely known Art Deco Artist is Émile Antoine Bourdelle, who reached fame as a “pioneer of 20th century monumental sculpture.” Like Schreckengost, Bourdelle was a painter, sculptor and teacher, and his Parisian studio eventually became a museum for his art. Less utilitarian by design, Bourdelle’s sculptures were often crafted as war monuments and memorial busts. Bourdelle’s sculpture depicted above is typical of the era, in which sculptors tended to “produce figures of strong mythological or allegorical inspiration (Stamati)” in the archaic style.

The films of the Art Deco period might be called the penultimate exhibition of the spirit of the era. Movie stars cavorted onscreen amid scenes of rich hotels and lush nightclubs. America, in particular embraced the style and extorted it, as Hollywood sought to spin a “magical web of luxury, youth, beauty, upward mobility, sexual liberation and rampant consumerism (V&A).” Moving pictures were still a novelty in the 1920’s, having been invented only 2 decades before, with major advances being made into technology of film each year. Some of the biggest names in show business, such as Fred Astaire and Ginger Rogers, rose to fame amid this romantically vibrant and lush backdrop of excess, luxury and  fantasy.

While the spirit of Art Deco were exhibited in painting, sculpture, and films, it is in architecture that the true genius of the movement found its medium. With the fundamental Art Deco qualities of utilitarianism and geometry, the buildings of the Art Deco are in a league of their own, employing stunning facades and entryways, as well as grandeur on an entirely unprecedented scale. “Banks used the style to convey security. Hollywood used it to define the good life (Juster).” Notable examples of surviving Art Deco architecture include the Hoover Dam, much of Downtown Las Vegas, and the Chrysler Building, to name a very few.

The end of economic prosperity in the 1920s heralded the beginning of the end, as “the stock market crash brought down the curtain in 1929, (and) it took the first phase of the Art Deco era with it (Juster).” Thanks to the utilitarian, attractively ornate and pragmatic nature of Art Deco, many examples abound in modern day architecture, textiles and art to remind us of this time in the not too distant past. It’s no wonder that Art Deco has become a revitalized sensation in the 21st century, with new objects d’ art being made all over the world in a style that was invented in the early 19th century spirit of post-war nationalism, industry, largesse and reformation. 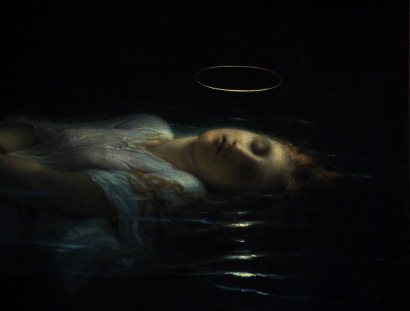